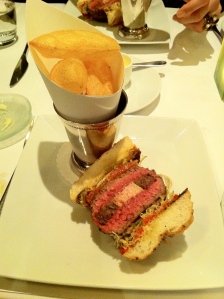 I’m a recent culinary school grad with an ever increasing passion for food and the industry at large. Although I’m pretty new to the game — officially began my culinary journey in June 2011 — I’m quite content with how much I’ve grown over the past several months and the experiences I’ve had. From meeting chefs who I’ve admired for years to cooking at some of the most exquisite restaurants, I’ve learnt and continue to learn at the kind of bumpy rate that often leads to success *fingers crossed*

Whether it’s the memories of being eight and first learning to make chicken nuggets from my then au pair, Petra, or stumbling upon the Food Network while lazily flicking through channels in my college dorm, it’s hard to pinpoint when exactly my food fascination began. All of that almost seems so far away now, as I delve deeper and deeper into this passion.
I’m Nigerian and have lived in a number of countries — England, Togo, Wales, United States and Spain — that have contributed to my development in many ways. The most obvious is my interest in travel and exploration. This blog will focus primarily on fusing African food with other cultures, whilst educating readers about the diversity of the continent.
So here’s my proposal. Stick around, at least for a little while, and I’ll do my best to insert as much silly banter between informative tips as can be expected from a blog like this. Deal?
*Please note that all photos on this blog were taken by me and those which are not will be credited. Contact me for use of any images and we’ll all get along 🙂

2 thoughts on “About Author”